LOVE & RAGE (2021)
Party at the End of the World
Be Good
Down in the Streets
All My Love
Can't Wait to Break Your Heart
Shit List
So Long, New Orleans
Be So Bad
Sufferin Fools
Ain't No Sin
Mercy
Twister
That Boy
Jacket
American Kid
Bed
Harbor
Desire
Moustache
Battle
Buck Up
Hot Night
Vim & Vigor
So Ferocious
Lovin is Easy
Ravenous
Fat & Happy
Scoundrel
To Be Known
The Animal I Am
Fever Dream
Azalea
Laziest Gal in Town
Heavenly Thing
Two Sleepy People
You Don't Know What Love Is
What Is This Thing Called Love?
Do You Know What It Means To Miss New Orleans?
Sweet Lorraine
Don't Come Too Soon
I'll Be Seeing You
Not Old, Not New
Under Your Thumb
Trigger Finger
Backbone
Smoke Alarm
Together Too Long
Backseat
Little Death
Lonely No More
Backbone
Idiot Heart
Chicken
All We Got
Honest Truth
Buoy
Itches and Tugs
Please
O, Gabriella
Money in the Bank
Two at a Time
Every Punch You Throw
Baby Can Dance
Crazy for Love
thoughts on love, sex, music and ferocity
tagged: female sexuality
Blog Navigation
Recommended Posts
Casual Love
How Not To Be A Nice Girl
New Rules for the Music Business
Emotional Affairs Are Not a Real Problem
How to DO Creativity - Part II.
Six Things I Hope I Learned in My Twenties
The Importance of Practicing Heartbreak
On Women Who Like Sex
Three Myths About Art and Success

Tomorrow, I am releasing music video for “Backseat”, which is a song I wrote about wanting to have sex with a hot tattooed guy who unfortunately had a girlfriend. In said video, I will be dancing around in lingerie, drooling over my dear (hot tattooed guy) friend Dan, and singing some pretty thinly veiled sexual innuendo. (Update: see the video here.)

So, this seems like the time to make my confession. Confession might not be the right word, actually, considering my last album, Idiot Heart, was more or less an epic poem on the topic. But, for those of you who don’t know me, or who aren’t big on lyrics, or who are still nursing your vision of me as an innocent young folksinger, here goes: I like sex. A lot. I don’t like it because it’s all about love, or because it’s some kind of spiritual journey for me. I like it, mostly, because it’s just so dang fun. Because it makes me feel alive, and it allows me to share that aliveness with other people. Because it helps me to learn things about my body and mind and heart that I otherwise wouldn’t.

In other words, I like sex for the same reasons I like music and dance: it is a joyful, playful, fun, surprising way to connect with people, and to explore the human experience. So why, when I’ve written and talked extensively about music and dance, haven’t I gotten around to writing about sex? Because I am afraid of what it will mean. I’m afraid of being judged, shamed, belittled, or reprimanded. I’m afraid my fans will run screaming into the hills, hiding their children, or become creepy stalking phone-breathers. It’s only recently occurred to me that these fears don’t belong to me; they belong to a culture with a long history of wrongheaded, destructive views about sex, especially as it pertains to women. In my own interest, and the interest of sex-liking women everywhere, let’s get a few things straight.

I think the idea that sex and love are the same thing (perpetuated throughout the world for much of recent history by religion, art, literature and advertising) is responsible for many of our misconceptions about both, so let’s get this one out of the way first. Clearly, on occasion, people who aren’t in love have sex. Clearly, also, people love other people and don’t have sex with them. I’m not saying they’re mutually exclusive, but neither are they inextricably linked. Love and sex, like milk and cookies, pair well; but neither is required for the enjoyment of the other.

Countless theories have been put forth over the past few centuries about why women don’t like sex. Without going into the tedious details, let me state my own opinion on the matter: they do.

If you don’t buy it, let’s do an experiment. Let’s start a new culture where women, from their girlhood, are told that sexual pleasure is a natural, fun part of being female. They are never told that sex is dangerous, dirty or weird. They are never badgered, shamed, pressured or forced into any sexual experience. When they become interested in sex with other people, they are encouraged to explore it in a consensual, safe, fun way, with whomever they find themselves attracted to. All of their sexual partners are caring, communicative, generous, and happy to take direction.

That will be our control group.

All people are vulnerable to rape and sexual assault. All sexually active people are vulnerable to sexually transmitted infections. I don’t believe there is anything about liking sex, or acknowledging it, that puts me in a more vulnerable position. That’s not to say that there are no risks to having sex, but those risks are not higher than, say, driving a car. Driving a car is generally considered a justifiable risk, whereas having sex - colored by its cultural legacy of shame - is not.

4. Women who like sex will not necessarily have sex with you.

This, my friends, is the clincher. When I find myself in a conversation about sex, and mention that I am a fan of the activity, the men in the room tend to get very nervous, very handsy, or very surly. I think this is due to a common misconception: that women who like sex will have sex with anybody. Like, our brains will be so flooded with arousal endorphins that we’ll transform into some kind of pansexual nymph.

Women who like sex still have all our wits about us. Like most people, we only want to have sex with people who we think are attractive, and trustworthy, and with whom we have chemistry. 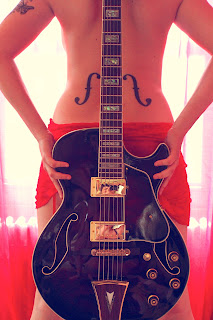